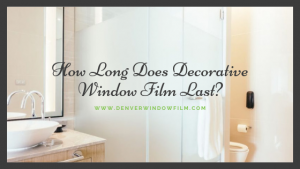 Decorative window films are becoming increasingly popular in the world of architecture. More and more Denver homeowners and businesses are starting to realize their benefits. Not only are they super versatile, and can be used for everything from retail store signage to privacy for bathroom and shower doors, but they also cost next to nothing. Even high-end decorative films like dichroic color changing films and custom graphic films can be purchased for a reasonable price. They’re much more economical than custom glass, which costs thousands.

But how long do decorative window film applications last? Sure, they may be a bargain deal, but do they last as long as some of the more expensive alternatives? Actually, the answer might surprise you! Here’s everything you need to know about the life expectancy of decorative glass films.

How Much Does Professional Window Tinting Cost?

Most homeowners spend somewhere between $300 to $800 for professional window tinting. Speciality films may cost more than standard films. Large commercial properties can expect to spend a few thousand dollars.

The lifespan of window film depends greatly on its quality and the materials used in its manufacture. Most window films last somewhere between 10 to 20 years. However, this time can be longer or shorter depending on the amount of stress put on the film.

Factors that Affect the Lifespan of Window Film

The main factors that dictate how long a window film lasts are:

Is It Worth It?

We think so, yes. Decorative window film offers Denver property owners a much more affordable solution than replacing glass panes or windows. Frosted and etched glass cost as much as $125 per square foot. Decorative film, on the other hand, only costs about $6-12 per square foot. Even if you replace it several times, it’s still much cheaper.

Do you have questions about window film? Curious about how long a certain type of film or product will last? We’d be happy to help. Call our office to get more information about window film installation in Denver.