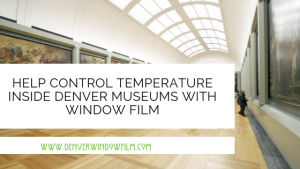 Here in Denver, we are lucky enough to have several museums that are interesting and great for our city’s visitors and residents alike.  These are places to view and appreciate, art, history and the like. They also play a big role in the preservation of these treasures too. As you well know, most museum buildings tend to have a lot of windows to help keep areas well lit for viewing art.  Which is a great way to allow natural light to bring out details in the artwork and historical relics. However, as wonderful as windows are in allowing for the very best viewing light is–it also causes considerable climate issues. In fact, museum windows and skylights make a climate-controlled environment nearly impossible. However, window film is a solution to this issue.   It is a simple, cost-effective way for museums here in the Denver area to keep even temperatures throughout museums. It is a powerful ally in keeping staff and visitors to museums free from hot and cold spots which allows them to comfortably enjoy our most valuable pieces of art and history.

WIndow film filters natural light and creates an inviting atmosphere.  At the same time, it provides greater temperature control and stability.  For places like museums, which tend to have large windows and taller ceilings, window film solves interior climate issues through various avenues.

Keep in mind, that while window film works great for controlling temperatures in museums, it works just as well in any commercial setting.  So, if you own a commercial space here in Denver and are looking for better climate control, contact us today to learn how window film can help!