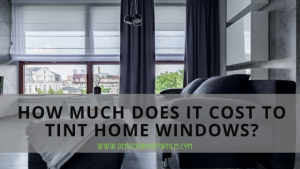 When pricing out window film you will probably see a lot of averages. For instance, the 2019 national average for the cost for residential window tinting was about $5 to $8 per square foot. But that doesn’t really mean anything because it combines every type of window film for every application. To get a better idea of how much window film costs we have provided a cost range for the films homeowners use the most.

The phrases window tint or window film are general terms. Window film is almost always bought for a specific purpose and the price of film varies based on that. So while a security film may cost $16 a solar film may only cost $10. Therefore it is important to price window film based on what you need for your home.

The top 4 window films for homes are:

Therefore, you will likely be installing one of these four in your home. Below is a price range for each of the most sought after home window films.

Solar Control Window Film: Spectrally selective films are usually used to reduce heat, glare, and UV radiation in a home. The cost of this type of film typically ranges from $9-18 p/SF

Privacy Window Tints: These tints keep the eyes of the world (and your neighbors) out of your home and help with glare as well. The cost of a typical privacy tint ranges from $5-$15 p/SF **High-end reflective films and/or smart films could increase the cost well past this range

Safety and Security Window Film: These films help prevent robberies and give your family the peace of mind that knowing your glass windows and doors are protected brings with it. Security film ranges from $8-16 p/SF *Attachment systems cost an additional $2-5/LFT.

**All the window film costs above do not include the added cost for installation which typically ranges from $2-$5 p/SF.

The Complexity of a Window Tint Project Can Affect The Price

The prices we listed above can easily be influenced by the size of the project, the difficulty of installation or extra work. For instance, a door with multiple French panes may require additional charges. Hard to reach windows often do too. If a client requires furniture to be removed or blinds taken down, many window film companies will charge an additional fee. These are great things to know going into a project to avoid any surprises.

It is important to understand the cost of your window tinting job will vary from space to space, installer to installer and film to film. Therefore, the best way to get exact pricing on how much it costs to tint your Denver windows is to reach out to us here at Denver Window Film for a free, onsite estimate today!

During the current Covid-19 slowdown,
we are still able to help you with your project planning.
Call: (303) 731-5024
Email: contact@denverwindowfilm.com

Powered by Convert Plus