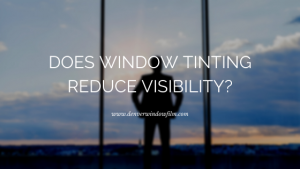 In 2020, window tinting is almost a standard practice. Architects and property owners alike are becoming more aware of the benefits of window tinting, and are eager to get their hands on something that can be beneficial for both the environment and the building’s intended occupants. Truly, window films are now more popular than ever.

We know what you’re thinking: That’s great, but window film just isn’t for me. I don’t think it’s worth it to sacrifice my views or the sunlight. But you’re missing one important piece of information.

Window tinting doesn’t change visibility. Denver property owners can obtain all kinds of clear window films nowadays that work just as well, if not better, than traditional tinted versions used in the past.

Window Tinting & Visibility: What You Need to Know

The idea that installing window film will make your windows darker or change their clarity is a common misconception. Many people have made the mistake of making this assumption. But to be clear (pun intended), window tint doesn’t necessarily affect visibility. There are tons of brands that make highly effective window films that are crystal clear. These include Huper Optik, 3M, Vista, and Llumar.

To understand how window film works, it’s important to know a couple things about light and the electromagnetic spectrum. There are many types of light. The type responsible for heat is totally different than the type that creates the visible light we see. Most window films are designed to deter only the heat-producing type.

This is accomplished through the use of spectrally selective technology. When the sun hits tinted glass, the film separate the electromagnetic frequencies and singles out the heat-blocking rays. Heat is kept out while visibile light is granted permission to pass through.

Will Window Film Change the Color or Clarity of My Windows?

Not unless you want it to. You can choose to install a clear window film if preserving light or clarity is big concern for you.

However, it can be advantageous in many ways to install a film that will create aesthetic alterations. Neutral colored films will soften the light coming through and create an elevated, designer look. And decorative films will help you create privacy without blocking light.

It’s all about what outcome you’re trying to acheive. But if all you want is something that will keep the heat out, a clear window film will do just fine.